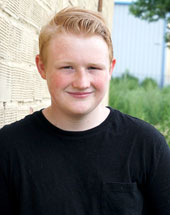 More often than not, James has a smile on his face and is most likely cracking a joke, even if it’s to break the tension in the room. You can always count on James to make others laugh and to ensure that everyone around him is happy. His sense of humor is clear and sharp and he is excellent at being sarcastic. Even when he isn’t cracking a joke, James has developed excellent communication skills, especially with adults, and can hold a conversation with anyone. He likes to be social and seeks approval from his peers and the adults around him.

In his free time, you can find James working out at the gym, playing a game, or watching sports. He loves the Seattle Seahawks and is always excited to catch a game and cheer them on. Though he’s not overly athletic, James does really enjoy watching and participating in sports. Recently, he and a friend have been joining in on a college team’s soccer practice. The team encourages the kids to join in and work out and practice alongside them, a social event that James really looks forward to every week. James also enjoys working out at the gym.

When he’s playing indoors, James is likely drawing, playing video games, writing, or watching a movie. While he enjoys YouTube videos, James is an even bigger fan of a family movie night or a trip to the movie theater to catch the latest release.

James’s faith is important to him, as well. He considers himself a Christian and would like to continue to attend church on Sundays, even when he is adopted.

Currently in high school, James thrives with quality time with his teachers and mentors as it encourages him to stay organized and on task.

An adoptive family who will support James’s relationship with his biological family will be essential.

Despite anything he’s been through, James has an amazing sense of hope for the future. He is great at advocating for himself and has expressed that he really wants to be adopted. As he continues to work through some of the tougher things that life has put in his way, James has made noticeable progress with his mindset and behavior. An adoptive family who will encourage him to be open, kind, and patient will be really valuable as he continues to grow into his teenage years.

James has stated that he would like to be adopted, and is really open to going out of Washington State for a brand new start. James has a talent for conversation and humor and is great at viewing every situation in a positive light. More than anything, James would really benefit from an adoptive family who will never give up on him and will spend a lot of quality time getting to know him for all that he is. James will do especially well in a family with a strong male role model and/or older brothers in the home.

James is also featured on the Northwest Adoption Exchange website. Please check out his profile for the possibility of additional photos, videos, and inquiry information.